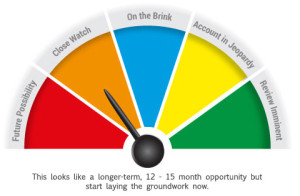 advising corporation TD Bank, where she served for over seven years, McLaughlin led marketing, digital transformation and other responsibilities. At SS, she replaces Hannah Grove, the company's former CMO of 12 years, who retired in November 2020.

According to iSpot, SS first began investing in national TV commercials in January 2021; since then, around $25.7k has supported its "Take a Hit" (see video above). This ad explores the hits that the global pandemic has had on different industries, promising viewers that SS can help them get back up. It has primarily targeted male consumers viewing programs such as The Lead With Jake Tapper, Varney & Company, First Ladies, Making Money With Charles Payne and Bloomberg Markets: Balance of Power.

As you can tell from SS's increased digital ad spend, it's primarily targeting millennial men right now; it also targets company in need of financial advising. Per Kantar data, the company also invests in print media. It holds planning conversations in Q1 and buying conversations in Q4.

Agency & martech readers - Reach out soon to see what work is available under SS's new CMO. The company currently works with The Gate Worldwide