In last report on the company, spoke about spending shifts with the release of the omnichannel brand campaign "All the Fulls" in mid-July. "All the Fulls" launched through TV, radio and increased digital spend as well as social activation. Red Robin has seen increased media engagement on Facebook, Instagram and Twitter. Moore also noted media spend will increase YOY this Q3, but it will decrease slightly during Q4, remaining "fairly comparable" to 2018.

The campaign is based on the statistically-measured premise that most children (73%) wish they had more time to spend with their parents and showcases the playful days of August. In addition to targeting all the lonely children and guilty parents, Red Robin has begun a "guest deep dive" in Q3, which will help them better target guests by measuring what inspires people to visit the establishment.

The "deep dive" effort is presumably a hyper-targeted digital method, though exact details were not mentioned; the work should be finished this fall. Following the conclusion of this effort, agencies may see a shift in branding or targeting, which could raise the likelihood of a review. Sellers may see increases in spending in digital and mobile channels if the company finds it necessary to target younger audiences as a result of the study.

Red Robin made similar increases in digital display spend during Q3 last year, Adbeat reports, but there has been a YOY increase in spend of 44%. Nearly all digital display ads have been videos placed through YouTube ($1.5 million) onto, so surprisingly, youtube.com. The most ads placed site direct have been published on adultswim.com ($13.4k) and amc.com ($11.2k). In the 365 days prior, Red Robin spent $700k on this channel. 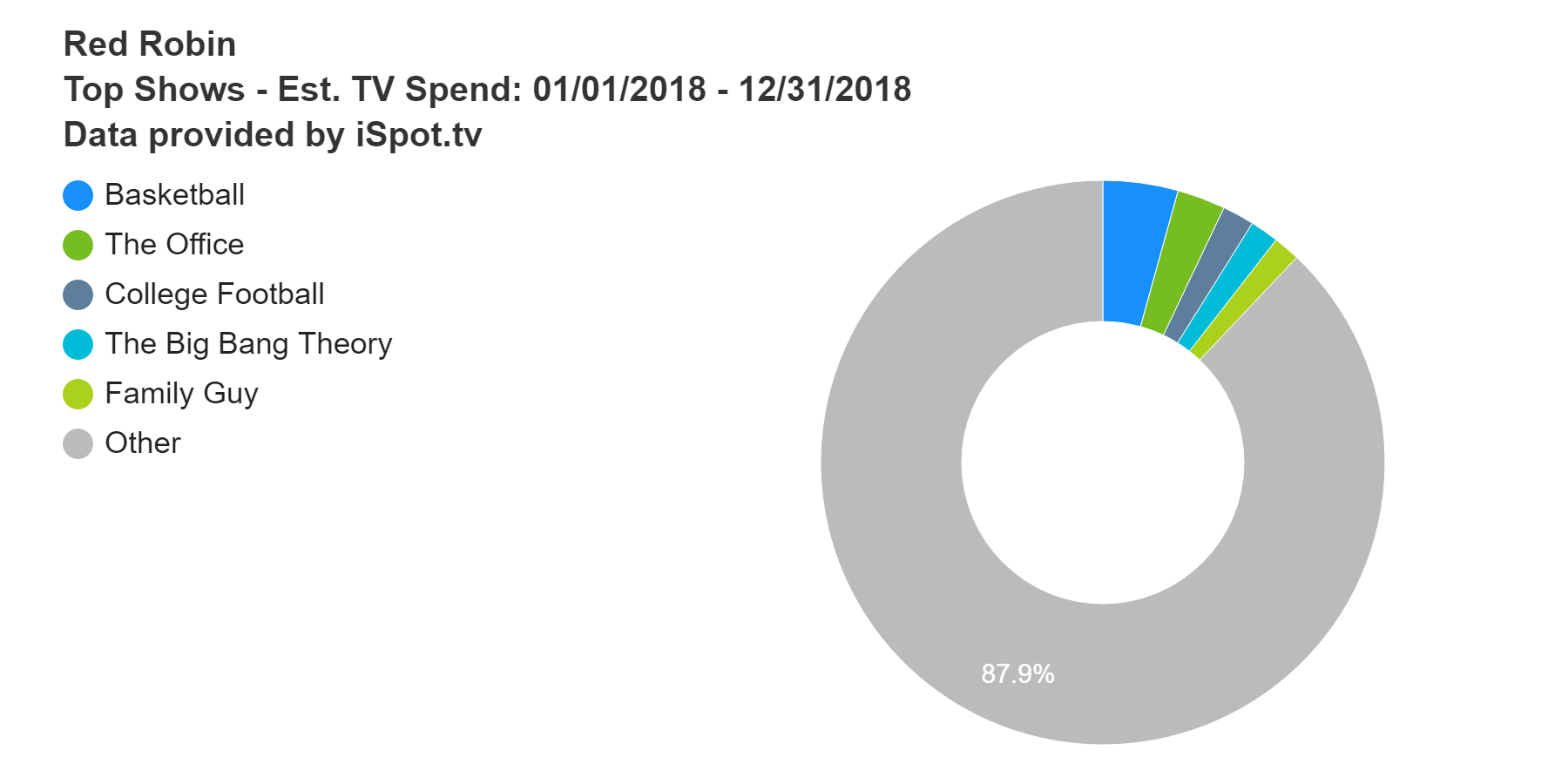 According to iSpot, Red Robin tends to begin placing national TV ads in March, spending in month-long increments throughout the year. YOY spend has actually decreased this year, reportedly, dropping from $34.6 million this time last year to $22.8 million YTD. It may be more accurate to say spending dollars have shifted from TV to digital, though other channels cannot be measured from spend increases or decreases until after the year's end. In total, Red Robin spent $46.9 million on TV ads last year. See chart for top show targeting.

Sellers -- Offer digital and TV space targeting Gen Z and millennial parents. Await the findings of the consumer targeting report being conducted. Red Robin has also begun placing TV ads during Ridiculousness in efforts to appeal to the children, though most targeted shows have a male skew. Keep in mind that Red Robin has been facing company struggles due to mall locations and reportedly long wait times, per Mashed; spending dollars may be on the decline due to the continued revenue "nosedive," which escalated to $10.6 million in losses for 2018.

Agency readers -- Currently, we know The Integer Group has assisted Red Robin in creative efforts, specifically TV, but we are working to confirm whether or not this was on a project basis. Red Robin has had a positive ROI for this latest campaign effort, so it may be feeling optimistic. Tote your ability to set them out from the crowded burger-dining market and remember the strong family appeal; focus on using case studies to target the right audiences. According to Mashed, Red Robin has faced struggles for some time, but its catering business increased in value from $1 million in 2017 to $11 million in 2018, so perhaps push this particular feature of the business as well.