CMO Walker claimed the agency's technological and digital knowledge was a key factor. This could be the first in a number of changes under the new CMO's leadership.

Intel promoted Stephanie Joukoff (May 2019) to senior director of marketing for corporate brand strategy, Olympics, sports and new technologies. It elevated Jordan Kim to global media director (December 2019) from global media manager. Dayna Carroll was promoted to director of global creative and experience (November 2019) from manager of global creative and experience. New head of marketing for emerging growth and incubation Darren Press (January 2020) joined from Omnicom, where he was SVP of digital marketing and creative director.

Per the company's Q4 2019 earnings report, Intel surpassed its earnings goal for the quarter by $1 billion, totaling $20 billion, and it recorded $72 billion in full-year 2020 revenue. The company is prepared for the increasingly digital future; it developed around $4 billion from AI related sales, the market for which is expected to reach $25 billion by 2024. It recorded $5 billion from its 5G network infrastructure business, another sector predicted to be worth $25 billion by 2023. It also controls 85% of the laptop processor market and 82% of the desktop PC processor market. It will likely increase marketing to support these ventures. 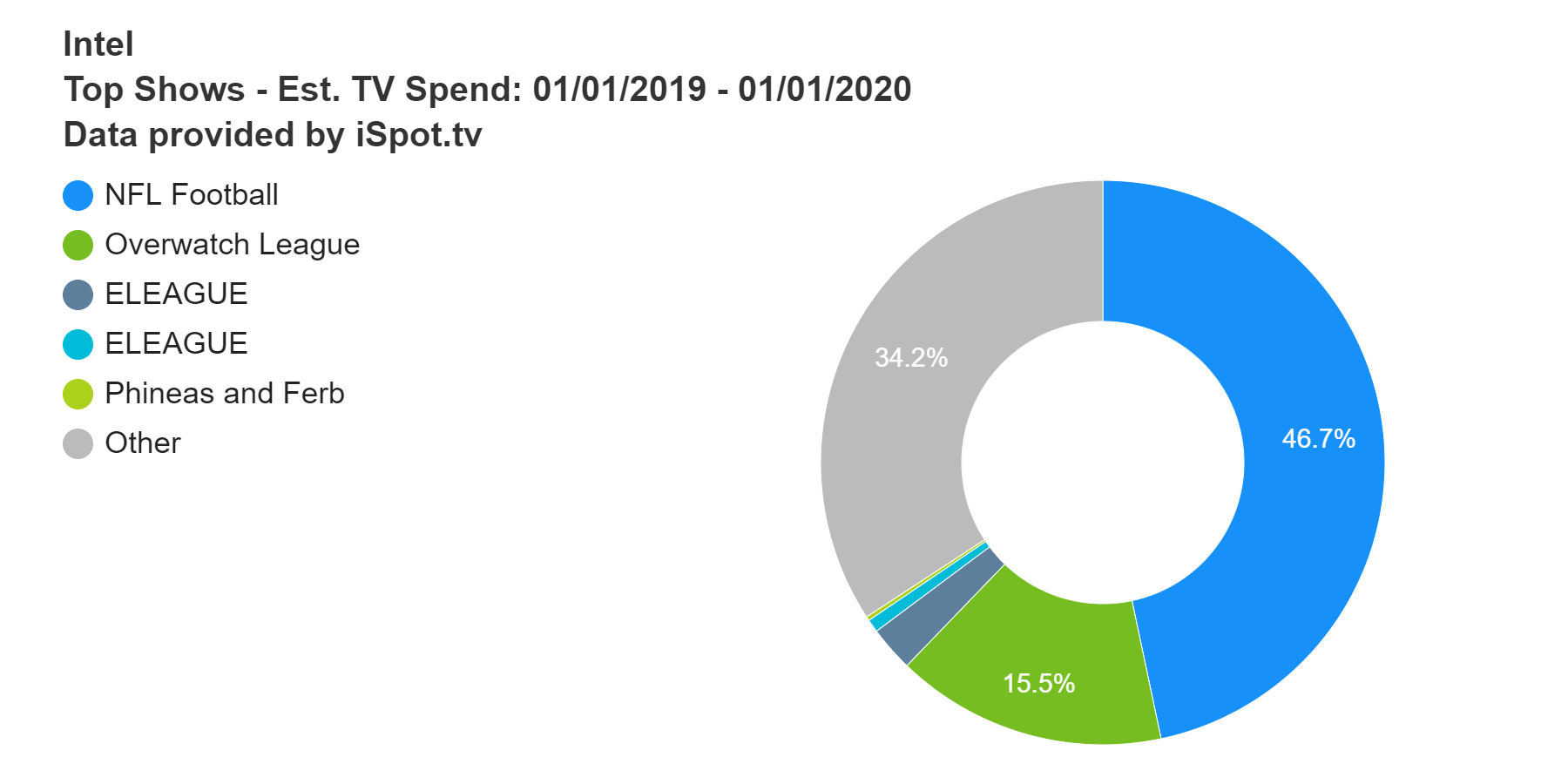 iSpot​ reports Intel spent around $525k on national TV ads in 2019, mostly in December during primarily male-centric programming (see targeting right). It spent a little over $60m in this channel in 2018. This drastic decrease may have resultef from the year-long CMO vacancy.

According to Adbeat, the company spent around $1.2m on digital display ads over the last 365 days, down from $7.7m in the 365 days prior. It placed 64% of these ads site direct onto crunchyroll.com, supercheats.com, psu.com, roosterteeth.com and forbes.com. It placed 26% programmatically through Google onto sites such as opb.org, techtarget.com, politico.com, theverge.com and digitaltrends.com. Finally, it placed 9% as video ads through YouTube onto youtube.com, goodhousekeeping.com, time.com, foxnews.com and metro.co.uk.

Sellers-- Intel's advertising spend has been down recently, but I expect it to rebound now that it has a CMO. Its target audience mainly consists of millennial and Gen-Z, with a male skew, especially college students and young professionals in the market for a computer or core processor. The company mainly advertises through national TV and digital display ads, but Kantar reports it also uses local channels such as OOH and print.

Agency readers-- Agency hires commonly follow one another, and combined with a relatively new CMO, this account may be vulnerable. Reach out soon to secure top priority; competition will come from AMD.