here to view it. The campaign promotes the Elantra's modern tech, along with the company's passion for challenging the status quo (including questioning prior generations' attitudes toward gender topics), to appeal to millennial and Gen-Z drivers.

Hyundai also launched a campaign (video above) telling viewers that if they buy a new car before April 30, 2020, the company will cover payments for up to six months in the event that the viewer loses their job as a result of the global pandemic. Way to act quickly, Hyundai. 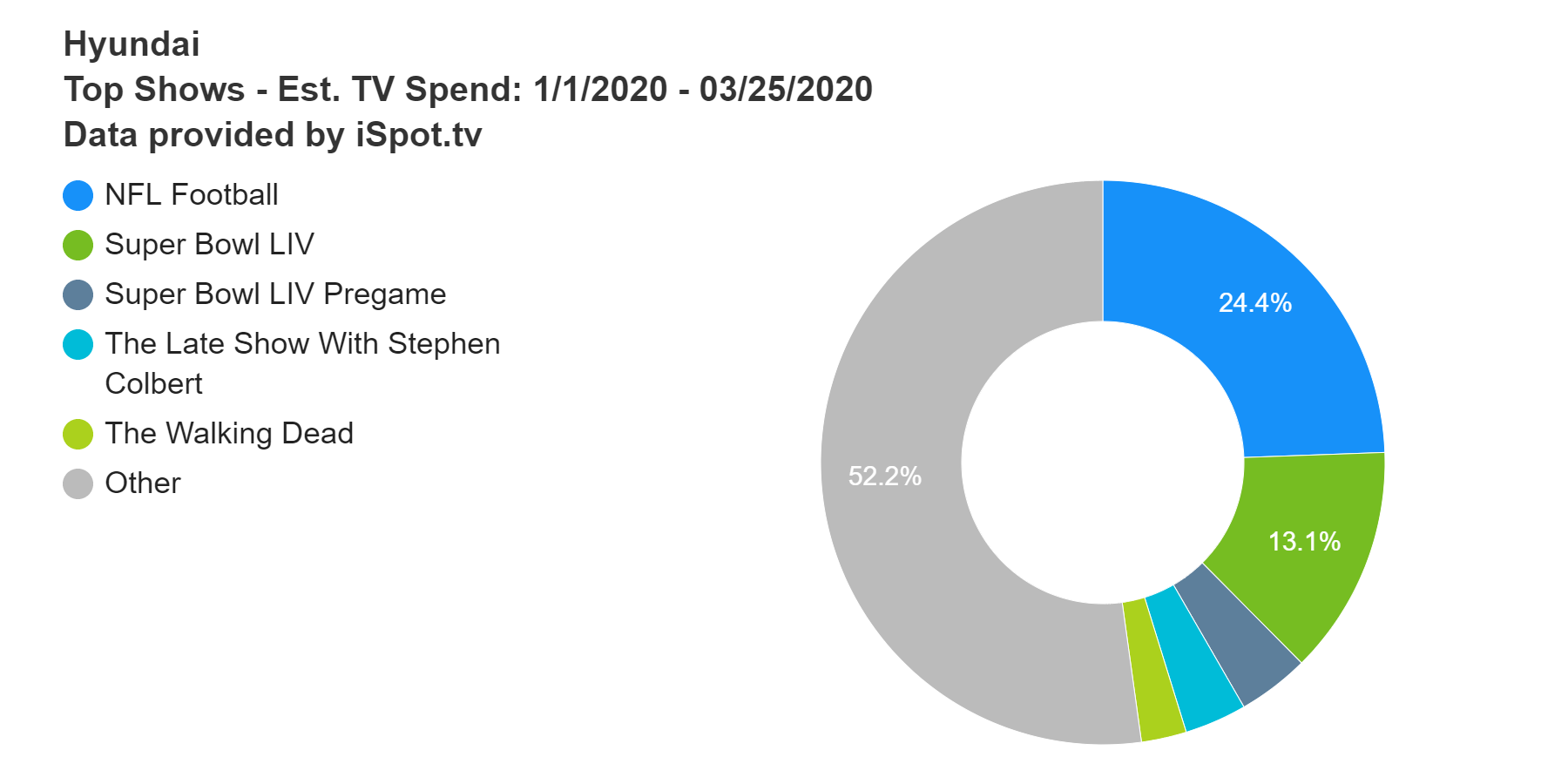 According to iSpot, the company's YTD national TV spend of roughly $77.6 million targeted male, sports-oriented audiences (see targeting right), up 19% from the roughly $65 million spent by this point last year. Hyundai's full 2019 spend increased by 15% to around $290.4 million from around $252.1 million in 2018.

On the other hand, Adbeat estimates that the company only spent $3.8 million on digital display ads from March 2019-2020, less than half the $8.4 million it spent from March 2018-2019. Most of the past year's ads were either YouTube videos on youtube.com ($1.6 million) or site-direct placements ($1.5 million) on publishers such as edmunds.com ($429.6k), espn.com, nbcsports.com, caranddriver.com and kbb.com.

Hyundai's LGBT+ inclusion focus and pandemic response will appeal to Gen-Z and millennials; the LGBT+ community's global spending power is about the size of the world's fourth-largest country's GDP, per Marketing Dive. Promoting less narrow, binary gender definitions has become critical to reaching audiences such as Gen-Z. Additionally, millennials have become the US's largest car-buying demographic, Cox reports. Since Hyundai has special deals respecting the realities Americans are facing due to the global pandemic, its spend may not slow down as a result; we will have to wait and see. As you could probably tell from the company's TV and digital display placement, its Gen-Z/millennial target demographic skews toward male, sports-oriented audiences. Offer omni-channel space since Kantar data also reports search, OOH, print, radio and local broadcast usage, and Hyundai has been pretty active on its social media platforms. Its spend usually spikes during the holiday season in Q4-Q1, but who knows what it will do with this new pandemic-related campaign.